There’s been a wave of enthusiasm recently among Tweeting midwives. I was on holiday when it started (supposedly away from emails and social media, but sneaking back on now and again), and returned to find that a host of fellow midwives had changed their Twitter profiles to avatars.

Rather slow off the mark, I finally downloaded the Baby Buddy app, the subject of the aforementioned excitement. I had no real pre-conceived notions as to what to expect, but it soon became apparent from this intuitive and easy-to-use app that I was about to have my own personal guide to help me navigate my way through pregnancy and the first 6 months of my newborn’s life.

The Baby Buddy app is a free app that has been created by UK charity, Best Beginnings, as a tool for supporting parents, especially young parents, from pregnancy through to the transition to parenthood and caring for a baby. Users are first drawn into the app by the rather fun exercise of creating an avatar (mine is featured, above left), who will become their ‘Buddy’ throughout their pregnancy and beyond. The Buddy is full of great resources, including videos (the wonderful ‘Bump to Breastfeeding’ film can be accessed from this app), information at each step of the way, support for setting personalised goals (such as pre-set goals – pelvic floor exercises or eating breakfast or customisable goals), reminders of appointments and a host of other great features. 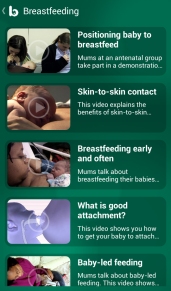 The Baby Buddy app, to be fully launched in November 2014, is currently in the feedback phase, and will eventually have additional features, including ‘bump around’ (a guide to what’s on in the local area) and ‘baby booth’ (for recording photos of the growing bump then baby) as well as a version for dad’s and content extended to the first 3 years of a child’s life.

Not only will Baby Buddy be a fantastic resource for expectant and new parents, but it will be a great resource for healthcare professionals.  I think back to the hours I spent trying to explain, demonstrate and communicate good positioning and attachment for breastfeeding to new mums – if only I had a short film to hand which showed positioning and attachment in action! Well, Baby Buddy has it.

Continually eliciting feedback from users – parents and health professionals alike, will be the key to making this app truly successful.  That is exactly what Best Beginnings is currently doing.  They are encouraging both groups to download and have a go, and then submit feedback. The app can be downloaded here on the App Store or here on Google Play. 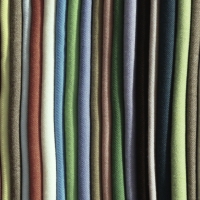 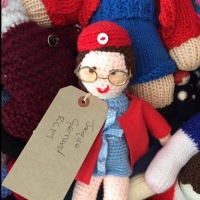 A Blog about Academic Writing

Welcoming you in to the secrets, techniques and taboos around succeeding in a Research Higher Degree

Just like the horse whisperer - but with more pages

Hosted by Médecins du monde - Doctors of the World